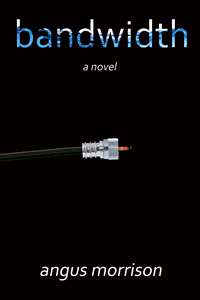 We already know about Ripley Rand’s songwriting ability, but little did we know that his creative skills didn’t end there.

Rand, who was nominated on July 28 to be the U.S. Attorney for the Middle District of North Carolina, recently helped out his college friend Dan Angus Morrison by doing the graphic design for the cover of his book, Bandwidth: A Novel.

The book, about greed and terrorism, is self-published by Morrison, who when discussing ideas for the cover asked Rand if he was willing to design it himself.

“He had some good ideas so I said, ‘Why don’t you cobble something together?’ and it turned out beautiful,” Morrison said.  “It was a very simple, easy process…. He just really nailed it.”

As a longtime friend, Rand was gracious enough not to ask for payment, although Morrison did thank him with “a cheap bottle of wine,” Morrison joked.

Morrison thinks Rand’s creative streak will be an asset to him if he is confirmed as U.S. Attorney.

“[His creativity is a] nice feather in his cap,” Morrison said, adding that it is a good “complement to his legal work.”

“I think a creative side to anyone in any profession is a plus.” 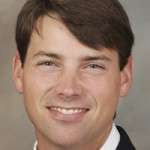 The committee has now endorsed 75 of Barack Obama’s U.S. Attorney nominees, 72 of whom have won Senate confirmation. The panel has yet to consider another two would-be U.S. Attorneys. There are 93 U.S. Attorney posts.

The Senate Judiciary Committee is scheduled to vote on a pair of U.S. Attorney nominees at its meeting Thursday.

The Justice Department has been without a known songwriter since Attorney General John Ashcroft left five years ago. But the drought could soon be over.

Ripley Rand, who was nominated on July 28 to be the U.S. Attorney for the Middle District of North Carolina, contributed lyrics and back-up vocals to “Don’t Do The Math,” which was released in 2008 on “Danceable in Victor,” the second album by The Balsa Gliders, a North Carolina indie-pop band.

The song does not have the patriotic fervor of Ashcroft’s “Let The Eagle Soar.” Rather, the lyrics of “Don’t Do The Math” paint the picture of a girl, who resembles swimsuit model and actress Cheryl Tiegs.

Marshall said the song is “almost just a narrative about a dream sequence,” but doesn’t have any particular significance.

“I would love to tell you it had a meaning,” he said. Rand did not respond to a request for comment from Main Justice.

Marshall and Rand met in law school at The University of North Carolina at Chapel Hill, and went on to host a rock and pop music show on WXDU-Durham 88.7 FM. Rand was a disc jockey at the radio station from 1994 to 2000, according to his Senate Judiciary Committee questionnaire.

Rand then aided his friend with The Balsa Gliders, which formed about a decade ago. Marshall said Rand has come into the studio for recordings, but has rarely performed live with the six-member band.

“He’s been a great friend,” Marshall said. “He’s given great assistance to the band.”

Ripley Rand, the U.S. Attorney nominee for the Middle District of North Carolina, contributed lyrics and back-up vocals to “Don’t Do The Math” on the “Danceable in Victor” album by The Balsa Gliders, an indie-pop group.

Having trouble seeing this? Make sure you have Adobe Flash 10 installed and give the video a minute to load after you click play.

On his Office of Government Ethics financial disclosure, Rand reported making $113,616.52 as a state judge since January 2009. He also reported $63 earned from the sale of his book since 2009.

UPDATE: On his Senate Judiciary financial disclosure, Rand reported assets valued at almost $1.2 million, mostly from real estate, and $142,800 in liabilities from mortgages, for a net worth of more than $1 million.

A George W. Bush administration appointee will step down Friday as U.S. Attorney for the Middle District of North Carolina to pursue elected office. 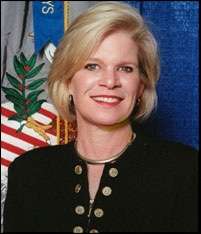 U.S. Attorney Anna Mills Wagoner, who has led the Greensboro, N.C.-based office since 2001, will vie for a seat on the Rowan County Superior Court, the Salisbury Post reported. She said it was “an honor and a privilege” to serve in the Bush and Barack Obama administrations.

“I am proud of the commitment and professionalism demonstrated by the U.S. Attorney’ s Office staff and the federal, state and local law enforcement officers with whom we have worked,” Wagoner said in a statement. “Together we have made our local communities and our nation a better, safer place to live, ensured the firm but fair enforcement of the criminal laws, and protected the interests of the United States.”

Wagoner is one of 13 U.S. Attorneys appointed during the Bush administration who are still holding their jobs more than a year and a half after Obama became president. Obama nominated Ripley Rand last week to replace her.

She will run against Rowan County District Court Judge Marshall Bickett in the election to replace retiring Judge John Holshouser, according to the Salisbury Post.

“The lessons learned as U.S. Attorney have given me a tremendous working knowledge of the state and federal court system as well as current law enforcement and legal issues facing our country and Rowan County,” Wagoner said in a statement to the newspaper. “I would be honored to continue serving Rowan County as its next Superior Court judge.”

The North Carolina State Bar has suspended the license of a former Assistant U.S. Attorney this month for practicing law without an active license, according to an order from the bar’s disciplinary commission.

The North Carolina law license of David P. Folmar Jr., who represented the Justice Department from November 2003 to March 2009 without a valid license, is suspended for five years. But he can apply to have the suspension lifted after a year and a half, according to the order dated June 11, 2010.

Folmar’s license was initially suspended in November 2003 for failing to obey mandatory continuing legal education obligations. He also was licensed to practice law in Florida, but his Florida Bar license was retired before November 2003. An Assistant U.S. Attorney must have an active license from at least one state bar to practice law.

The ex-prosecutor did not notify his supervisors in the Middle District of North Carolina U.S. Attorney’s office about his suspension. Middle District U.S. Attorney Anna Mills Wagoner fired Folmar in March 2009. She then informed lawyers and judges who worked with Folmar on hundreds of cases. The DOJ Office of Professional Responsibility also disciplined him, according to the order.

The former Assistant U.S. Attorney was “having personal and family problems” and “suffering from depression and turned to alcohol” when he practiced law without a license, according the order.

Folmar was convicted in 2008 of driving while impaired. Police reports said he had almost three times the legal blood-alcohol content of 0.08.

He sought counseling and has shown “extreme remorse,” the order said. Folmar had an “unblemished” record and has a “professional reputation of being an honest lawyer,” according to the order.

Wade M. Smith, Folmar’s lawyer, did not immediately respond to requests for comment from Main Justice.

Smith told Main Justice that it was a “serious, serious mistake” for Folmar to practice law without a valid license. But the lawyer said he thinks there is still a place for Folmar in the legal community.

“I see so much good in him and I’m keeping my fingers crossed for him,” Smith said.

David P. Folmar Jr. represented the Justice Department from November 2003 to March 2009 without a valid license from a state bar, according to a complaint filed by the North Carolina bar to its disciplinary hearing commission. An Assistant U.S. Attorney must have an active license from at least one state bar to practice law. Folmar’s Florida State Bar license was retired and his North Carolina State Bar license was suspended for failing to obey mandatory continuing legal education obligations.

The ex-prosecutor did not tell his supervisors in the Middle District of North Carolina U.S. Attorney’s office about his suspension, according to the complaint.

“[Folmar] falsely held himself out to the courts, his colleagues and the public as authorized and qualified to practice law,” the complaint said.

Middle District U.S. Attorney Anna Mills Wagoner fired Folmar in March 2009, according to the Salisbury Post. She then notified federal judges and lawyers who worked with Folmar on hundreds of cases, the newspaper said.

Wagoner said in a March 2009 letter to Chief U.S. District Court Judge James A. Beaty Jr., who serves in the Middle District, that she didn’t believe that Folmar’s suspension “had any material effect on any case,” according to the Post.

The newspaper said in May that the DOJ Office of Professional Responsibility was investigating the matter.

The Post later reported that Folmar was convicted in 2008 of driving while impaired. Police reports said he had almost three times the legal blood-alcohol content of 0.08.

The Middle District candidates (with biographies from Hagan):

-Lee Farmer has been the member-manager for the law offices of R. Lee Farmer since 2004. Prior to that, Farmer was a partner at Farmer and Watlington LLP for 20 years, gaining extensive background in civil litigation and the general practice of law. He has worked with various local, state, and federal law enforcement and public agencies.

-Ripley Rand has served as a Superior Court judge in Raleigh since 2002. Prior to that, Rand was an assistant district attorney in the Tenth Prosecutorial District of North Carolina directing the Domestic Violence Unit and participating on the Dangerous Offenders Task Force.

The Western District candidates (with biographies from Hagan):

-Peter Anderson is a partner at Anderson Terpening, PLLC where he specializes in federal criminal defense, complex commercial litigation and corporate compliance counseling. Prior to that, he served as the federal prosecutor with the Environmental Crimes Section of the Department of Justice and the Assistant U.S. Attorney for the Western District.

-Anne Tompkins is a partner at Alston and Bird, LLP concentrating on government investigations and compliance. In 2004 and 2005, Tompkins was one of four Assistant U.S. Attorneys who were part of the initial Iraqi Regime Crimes Liason Office in Baghdad, Iraq, under the Office of the Deputy Attorney General. She has also served as the assistant district attorney for Mecklenburg County.