During an appearance on ABC’s “This Week on Sunday, Senate Judiciary Committee Chairman Patrick Leahy (D-Vt.) suggested the Obama administration won’t get very far with its proposal to expand the amount of time a terrorist suspect can be interrogated without being read a Miranda warning, The Huffington Post reported.

Last Sunday, Attorney General Eric Holder said the DOJ is considering asking Congress to allow the government more flexibility in using the “public safety exception” — which allows law enforcement officials to question suspects before informing them of their so-called Miranda rights, which include the right not to talk to police. But Leahy said lawmakers are limited in their ability to change Miranda since the Supreme Court has ruled Miranda warnings to be a constitutional right.

“I sat down and talked with the president about this. The question is not so much whether I’m concerned about the civil rights one way or another, it is what a court will agree to. After all, it was the Supreme Court that set down the rules of Miranda. Whatever changes might be made, have to made within the confines of what the United States Supreme Court has already said,” Leahy said. “I think the president and Eric Holder understand that.” 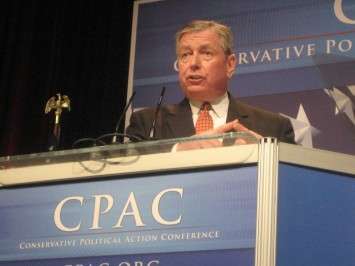 Former Attorney General John Ashcroft got a mixed reaction at the Conservative Political Action Conference on Friday, where some libertarian-leaning attendees booed his anti-terrorism policies, arguing they had violated the privacy of American citizens.

“There’s nothing honorable about taking away peoples’ rights,” shouted a woman in the crowd. Ashcroft responded that his time was up and he thought that woman’s was, too.

President George W. Bush’s first Attorney General received a standing ovation for his speech, but at other points, Ashcroft was jeered. One crowd member called him a fascist.

Today, Ashcroft told The Huffington Post that it was right to Mirandize suspected terrorists arrested on American soil. “When you have a person in the criminal justice system, you Mirandize them,” Ashcroft said.

His defense of the criminal justice system went against the current line of attack by President Bush’s last Attorney General, Michael Mukasey, who has been critical of Attorney General Eric Holder’s decision to put the alleged Christmas Day airplane bomber in the civilian justice system rather than in military custody.

During his speech, Ashcroft said, “We have the duty, from time to time, to respond [to terrorists] with the mechanisms and capacities of war rather than put our heads in the sand and think that we’re not at war or fail to consider whether we’re at war because we’re so in love with the vocabulary of the civil-justice system.”

He also said that a “range of opportunities” need to be available to deal with terrorists. He did not rule out the use of civilian courts - which the DOJ under Ashcroft and other Bush administration leaders used frequently to prosecute alleged terrorists and terrorism-related offenses.

Ashcroft was presented with the “Defender of the Constitution Award” in the afternoon. The introduction from radio host Scott Hennen was a bit incongruous, given Ashcroft’s position on those arrested on American soil. “Sadly, elections have consequences, and now we have Eric Holder and Mirandizing terrorists,” he said.

Ashcroft later came out to conclude a debate moderated by Jay Sekulow of the American Center for Law and Justice on the topic of whether security trumps freedom.

Panelists Bob Barr, a former U.S. attorney and Republican member of Congress from Georgia, and Jim Gilmore of the Free Congress Foundation represented the libertarian view. Rep. Dan Lungren (R-Calif.) and Viet Dinh, a former Assistant Attorney General who served as an architect of the Patriot Act, defended the mechanisms in the name of security.

On his way out of the speech, Ashcroft posed for photos with members of the armed forces but ignored questions from reporters and declined to take a pamphlet offered to him by a man wearing an Obama Joker mask.

Video of Ashcroft’s speech is available at C-SPAN. It starts about 66 minutes in.

Main Justice’s Video of John Ashcroft’s speech after the debate is embedded below.