Attorney General Eric Holder, announcing the plan on Monday, also said the U.S. Marshals Service would be launching a nationwide operation targeting the top 500 most dangerous non-compliant sex offenders in the country. 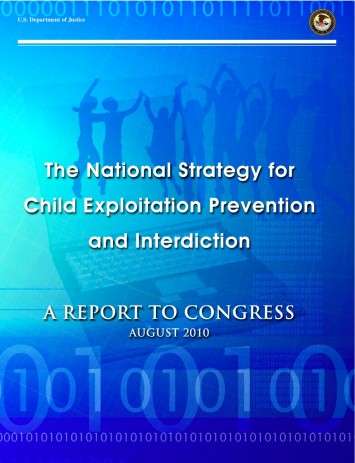 The National Strategy for Child Exploitation Prevention and Interdiction (DOJ).

The 280-page document outlines a blueprint to strengthen the fight against child exploitation, said DOJ. It concludes that cooperation and coordination “at all levels of government” will lead to better results.

The Department of Justice has filed 8,464 Project Safe Childhood cases against 8,637 defendants, according to the report. While the report touts the progress that has been made, it says the Department recognizes that more work must be done.

U.S. Attorneys offices have allocated 38 additional Assistant U.S. Attorney positions to devote to child exploitation cases, according to the report. The Justice Department is working to fill the positions and provide additional training to those prosecutors. Under the plan, the U.S. Marshals Service will set up a “fully operational” National Sex Offender Targeting Center to better track and apprehend fugitive sex offenders.

To help with public outreach, DOJ is re-launching ProjectSafeChildhood.gov. Project Safe Childhood is an initiative launched in 2006 that aims to combat the proliferation of crimes that use modern technology to sexually exploit children.

The report is embedded below.