The Senate Judiciary Committee will have a new top Republican in the 112th Congress.

Sen. Charles Grassley (R-Iowa) is slated to take over the ranking member post from Sen. Jeff Sessions (R-Ala.), pending resolution of a fight over Senate filibuster rules that is holding up committee organizing for the new Congress.

Grassley is moving to Judiciary from a plum perch as ranking member of the tax-writing Finance Committee. A GOP rule limits Senate Republicans to no more than six years in top committee spots, and Grassley had reached his limit on Finance.

Grassley struck an agreement with Sessions in 2009 to take over the Judiciary job this year. The agreement became necessary when Sen. Arlen Specter of Pennsylvania switched from the Republican to the Democratic party in April 2009, suddenly opening up the ranking member spot.

Under the rules, Grassley - the most senior Republican on the Judiciary panel - would have had to claim the ranking membership right away to hold it for the full six-year limit; otherwise the position would go to Sessions.

But Grassley didn’t want to leave Finance in the middle of high-stakes negotiations over the health care bill, according to reports at the time. He worked out a deal whereby Sessions would voluntarily leave the Judiciary post for the 112th Congress. Sessions is now slated to become ranking member of the Senate Budget Committee.

Grassley has served 30 years on the Judiciary panel but never served before as its top Republican. On legal issues, he is perhaps best known as a champion of whistleblowers and the False Claims Act, the statute whereby private citizens can file lawsuits against companies that defraud the government.

More recently, Grassley was a proponent of a controversial whistleblower provision in the Dodd-Frank financial regulatory law that has caused anxiety among corporate counsel.

The original language of the provision gave the Securities and Exchange Commission discretion in how to reward whistleblowers who bring the agency tips that lead to successful cases. When the provision got to the Senate, it was strengthened to give successful tipsters up to 30 percent of any fine over $1 million.

Senate Finance Committee Chairman Max Baucus (D‐Mont.) and the panel’s ranking member Chuck Grassley (R‐Iowa) have agreed on language to temporarily extend three Patriot Act provisions that would expire at the end of this month.

A draft of a Senate job creation bill includes provisions that would keep in place the Patriot Act’s “lone wolf,” business records and “roving wiretap” powers until Feb. 28, 2011.

The jobs bill is regarded as a top priority, and floor action is expected this month. A stand-alone Patriot Act renewal may be more difficult to achieve this month. The House and Senate have yet to iron out their differences on whether Congress should reauthorize all or some of the authorities.

The Senate Patriot Act bill would renew all of the powers. The House version would  reauthorize the records and “roving wiretap” provisions but not the “lone wolf” authority, which the government has never used.

Attorney General Eric Holder has said he backs the Senate bill, but he hasn’t publicly commented on the House legislation.

Here is a summary of the provisions that are due to expire:

A Department of Justice official who is in a relationship with Sen. Max Baucus (D-Mont.) withdrew as a finalist for Montana U.S. Attorney to live with the senator in Washington, a Baucus spokesperson confirmed to Main Justice today.

Melodee Hanes, the Montana senator’s former state director, withdrew earlier this year after Baucus sent her name and two others to the White House as his recommendations for the state’s top federal prosecuting job.

“Senator Baucus is currently in a mature and happy relationship with Melodee Hanes. They are both divorced, and in no way was their relationship the cause of their respective divorces,” Ty Matsdorf, a spokesperson for Baucus, said in a statement to Main Justice.

Baucus and Hanes mutually agreed she should withdraw from consideration for U.S. Attorney “after much reflection … because they wanted to live together in Washington, D.C.,” the statement said.

Hanes and Baucus, who both ended their marriages within the last year, are living together in Baucus’s Capitol Hill home, purchased in June.

Hanes, who is now acting Deputy Administrator for Policy in the Justice Department’s Office of Juvenile Justice and Delinquency Prevention, did not return repeated requests for comment left at her work.

Hanes said in a statement reported by The Associated Press in March that she withdrew because she had “been presented with other opportunities that I felt I could not bypass.” Hanes stepped down as the senator’s state director in June. She worked for Baucus’s Senate re-election campaign in 2002 as regional finance director and became a member of his Senate staff in 2003.

Hanes served as a county prosecutor in Montana for three years before joining Baucus’s Senate staff. She was also a law professor at Drake University in Des Moines, Iowa, and has written extensively on child and sexual abuse issues.

It is unclear when Baucus and Hanes entered into a personal relationship. A person familiar with the Max Baucus family told Main Justice that people at the June 2008 wedding for Zeno Baucus, the senator’s son from his first marriage to Ann Geracimos, observed the senator and Hanes dancing in a way that appeared “beyond professional.”

Baucus and his ex-wife, Wanda, announced their divorce in April after 26 years of marriage. Wanda and Max Baucus said in a joint statement in April reported by The AP that they “parted ways amicably and with mutual respect.”

“Our marriage has been an interesting journey often of intense work with many people who have become cherished friends,” the statement from Wanda and Max Baucus said, according to the AP. “We are grateful for the opportunities we have had together and now as we pursue individual lives we appreciate everyone’s understanding and respect for our privacy.”

As Senate Finance Chairman, Baucus is the Democrats’ point man on health care reform, now being debated on the Senate floor. Hanes now works for an arm of the Justice Department that supports research, training and programs to support juvenile justice programs throughout the country.

Hanes “independently applied for her current position at the Department of Justice,” the statement from Matsdorf said. “Having extensive experience and qualifications in the field, Ms. Hanes was awarded the position based solely on her merit. Since then she has excelled in her role.” Click here for a copy of Hanes’s resume.

Below is the full statement from Baucus spokesman Matsdorf:

Senator Baucus is currently in a mature and happy relationship with Melodee Hanes. They are both divorced, and in no way was their relationship the cause of their respective divorces.

When Senator Baucus and Melodee Hanes, his former state director, realized that their relationship was developing beyond a purely professional nature, Melodee began the process of resigning her Senate employment.

With an extensive background as a prosecutor and extensive legal experience (see resume below), Ms. Hanes submitted her name for consideration for the U.S Attorney position from Montana. Her name was one of six that was submitted for review by Senator Baucus to an independent, highly respected Montana attorney who reviewed the applications. After an extensive evaluation of all the applicants’ qualifications, Ms. Hanes was one of three applicants the third-party reviewer recommended for consideration. Senator Baucus and Senator Tester then interviewed those candidates and Senator Baucus then submitted those three names to the White House, with no ranking or preference.

While her personal relationship with Senator Baucus should in no way be either a qualifier or a disqualifier for the position,  during the nomination process and after much reflection, both Senator Baucus and Ms. Hanes agreed that she should withdraw her name from consideration because they wanted to live together in Washington, DC.

After withdrawing from consideration for U.S. Attorney, Ms. Hanes  independently applied for her current position at the Department of Justice. Having extensive experience and qualifications in the field (see resume below), Ms. Hanes was awarded the position based solely on her merit. Since then she has excelled in her role.

UPDATE 2:08 a.m.: Baucus spokesman Matsdorf told Main Justice that the relationship between Baucus and Hanes began in the summer of 2008. Hanes and Thomas Bennett, her ex-husband, divorced in December 2008. Baucus and his ex-wife, Wanda, announced their divorce in April 2009. 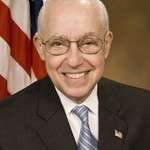 The White House told Congress that Walpin’s dismissal stemmed from a meeting where the former inspector general was confused and disoriented. Walpin, who was appointed by President Bush in 2007, said he was fired because he made unpopular reports on the misuse of AmeriCorps funds. Almost 150 lawyers signed onto the letter that disputed the claims made by the White House.

“All of us are unanimous in affirming Mr. Walpin’s integrity and competence,” said the letter obtained by the New York Law Journal.

The letter was delivered to White House Counsel Gregory Craig and members of the Senate Homeland Security and Government Affairs Committee, Senate Finance Committee and House Oversight and Reform Committee. We previously reported that Senate Finance Ranking Member Charles Grassley (R-Iowa), who also sits on the Senate Judiciary Committee, threatened to delay the confirmation of Justice Department nominees unless he got sufficient answers from the administration about the Walpin firing.