President Barack Obama on Thursday nominated Alison J. Nathan to serve on the U.S. District Court for the Southern District of New York. In February, Sen. Charles Schumer (D-N.Y.) announced he was recommending Nathan to the bench.

Since 2010, Nathan has worked in the New York attorney general’s office as as special counsel to the solicitor general. Previously, she served as a special assistant to Obama and an associate White House counsel. She also served as a senior adviser to the Obama campaign’s voter protection effort and was on its lesbian, gay, bisexual and transgender advisory committee.

From 2006 to 2008, she was a visiting assistant professor of law at Fordham University Law School and later was a Fritz Alexander Fellow at New York University School of Law from 2008 to 2009.

Before entering careers in government service and academia, Nathan was an associate at Wilmer Cutler Pickering Hale and Dorr LLP from 2002 to 2006 in the firm’s New York and D.C. offices. 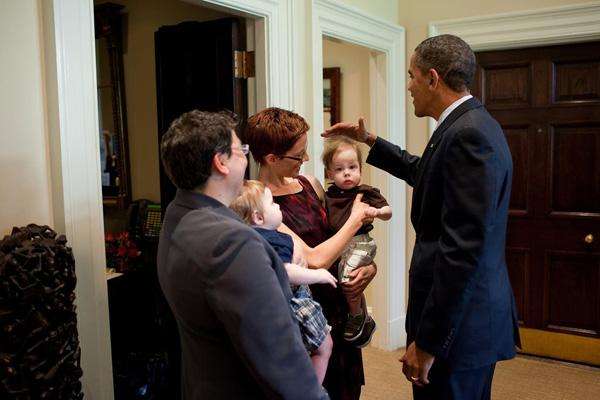 Judicial nominees for the Southern District of New York and the District of the Northern Mariana Islands did not endure an intense grilling from senators during their nominations hearing Thursday, The Blog of Legal Times reported.

Republican senators weren’t around to question Southern District of New York nominees Paul Engelmayer and J. Paul Oetken and the District of the Northern Mariana Islands nominee Ramona Manglona. Democrats asked only a few questions in the 20-minute session.

A spokeswoman for Sen. Charles Grassley (R-Iowa), the top Republican on the Senate Judiciary Committee, told The BLT that the senator couldn’t make the questioning because he had to attend a meeting with Iowa high school students.

Oetken would be the first openly gay man to serve in the federal judiciary if the Senate confirms him. He is currently senior vice president and associate general counsel at Cablevision Systems Corp.

Engelmayer leads the New York office of Wilmer Cutler Pickering Hale and Dorr LLP. He previously headed the Major Crimes Unit in the Southern District of New York U.S. Attorney’s Office and was an assistant to the Solicitor General.

Manglona is an associate judge with the Northern Mariana Islands Superior Court.

A lawyer for a witness in an insider-trading case will have to choose between his client and his personal ambition, a federal judge in Manhattan ruled on Tuesday.

U.S. District Judge Robert P. Patterson of the Southern District of New York told the lawyer, Francisco Navarro, that he couldn’t continue to represent the witness, Ali Far, if he followed through on his intent to apply for a post in the office of the U.S. Attorney for the Southern District, Preet Bahrara, The Wall Street Journal reported.

“My belief is, if you do apply, you will be disqualified and your firm may be disqualified,” the judge said. Navarro is with the firm Kobre & Kim LLP.

Navarro acknowledged that he planned to apply to become an Assistant U.S. Attorney, but he said he had not yet done so. The judge told him he must not apply at this time if he continues to represent Far, The Journal reported.

Far, who founded a California hedge fund, is a cooperating witness in a broad insider-trading investigation. He is expected to testify against Galleon Group hedge fund founder Raj Rajaratnam, who is accused by the government of reaping millions in illicit profits from an insider-trading scheme.

Just over a year ago, a prosecutor in the case announced his plans to leave the U.S. Attorney’s office and start his own firm, as we reported at the time. 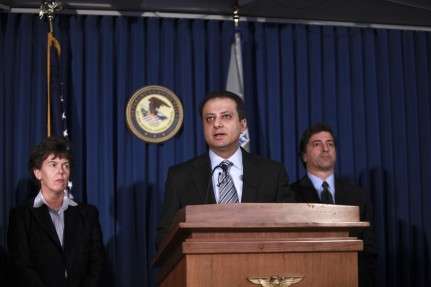 Preet Bharara, U.S. Attorney for the Southern District of New York, speaks at a news conference with Robert Khuzami, director of the division of enforcement for the Securities and Exchange Commission (right) and Janice Fedarcyk, assistant director-in charge of the Federal Bureau of Investigation's New York office (left) to announce insider trading charges against three portfolio managers and one hedge fund analyst. (Getty)

Hedge fund managers Samir Barai, Donald Longeuil and Noah Freeman, in addition to technology analyst Jason Pflaum, acquired and shared inside information that brought in millions of dollars in illicit profits, Bharara said at a news conference in Manhattan. The hedge fund employees paid off networks of individuals from at least six publicly traded companies to obtain the illegal inside information, the U.S. Attorney said.

Freeman and Pflaum have pleaded guilty, although it was not immediately clear if that meant they are cooperating  with prosecutors. On Tuesday morning, Longeuil was arrested at his New York home and Barai surrendered to authorities. If convicted, the hedge fund employees could spend decades in prison.

“The complaint unsealed today is a sad chronicle, not only of criminal conduct, but also its brazen cover-up,” Bharara said. “It is precisely the type of pervasive and pernicious activity that causes average people to think that they would be better off pulling their money out of Wall Street and stuffing it in a mattress.”

The investigation is ongoing, said Janice Fedarcyk, Assistant Director-in-Charge of the New York office of the FBI, who joined Bharara and Robert Khuzami, Director of the Securities and Exchange Commission’s Division of Enforcement, at the news conference. Assistant U.S. Attorneys Avi Weitzman, David Leibowitz and Special Assistant U.S. Attorney Andrew Z. Michaelson are handling the case.

Bharara has said investigating and prosecuting illegal insider trading is a top priority of his office, which is about a mile from Wall Street. Officials have charged 46 individuals in the Southern District of New York with insider trading over the last 18 months, he said. Of those, 29 have pleaded guilty.

In 2009, the U.S. Attorney’s office brought insider-trading charges against billionaire Galleon Group LLC founder Raj Rajaratnam. Prosecutors allege that he earned more than $33 million in illicit profits from the insider trading. His trial is scheduled to begin Feb. 28.

The federal government has made wiretaps and body wires important tools in its insider trading investigations. The probes of Rajaratnam and the four hedge fund employees included the use of one or both of the methods for gathering information.

On Tuesday, Bharara defended the government’s use of the techniques. He said the case against the four hedge fund employees is “Exhibit A” for why the investigative tools are important in white-collar criminal investigations.

Recently, the NYPD has come under fire from critics who say the department has downgraded higher-level offenses, listing what should be felonies as misdemeanors instead. According to Kelly, the NYPD Quality Assurance Division has identified an annual misclassification rate of approximatley1.5 percent.

The Crime Reporting Review Committee over the next three to six months will examine the NYPD crime-reporting system and auditing functions, read documents about trends in crime misclassification, and assess the public dissemination of the data.

A former federal prosecutor in the Southern District of New York has joined Sills Cummis & Gross P.C. as a member of the firm’s litigation practice group.

Gouraige received recognition from the U.S. Department of Health and Human Services for his significant contributions in fighting fraud in Medicare and Medicaid.

In addition, he has worked in private practice in New York City, focusing on antitrust  litigation.

A court-appointed trustee handling the liquidation of Bernard Madoff’s shuttered firm reached a $7.2 billion settlement with the estate of philanthropist Jeffry Picower, who was a major beneficiary of  the former investment adviser’s fraud.

U.S. Attorney Preet Bharara of the Southern District of New York said in a statement on Friday that the settlement is “truly historic” and “a game-changer for Madoff’s victims.” The settlement is the biggest single forfeiture in U.S. history.

Bharara applauded Barbara Picower, who represented her late spouse’s estate, for going into the deal with the U.S. Attorney’s office. Her husband had a heart attack and drowned in his pool at his Palm Beach, Fla., mansion, a few months after Madoff was sentenced to 150 years in prison for defrauding thousands of investors in an enormous Ponzi scheme.

Picower’s widow said in a statement that her husband wasn’t involved with Madoff’s fraud, but that the Picower estate would “return every penny received” through the convicted Ponzi schemer’s investments, according to the Associated Press.

Picower and his account-holders deposited $619.4 million with Madoff from the late 1970s until 2008, according to a forfeiture complaint. They withdrew $7.8 billion from Madoff’s firm, the court document said.

“By returning every penny of the $7.2 billion her late husband received from [Madoff's firm] to help those who have suffered most, Barbara Picower has done the right thing,” Bharara said. “We will continue to work tirelessly with our partners … to track down any and all proceeds of Madoff’s Ponzi scheme and return them to victims.”

The court-appointed bankruptcy trustee is Irving Picard a partner at the law firm of Baker & Hostetler LLP in New York, who has filed several civil lawsuits to recover funds for victims of Madoff’s fraud. Picard filed a complaint last year asserting that a sophisticated investor like Picower should have suspected fraudulent activity by Madoff, but Picower was never accused of criminal wrongdoing.

The settlement consisted of $5 billion to resolve Picard’s lawsuit and $2.2 billion to settle with federal authorities.

Picower’s wife is represented by William Zabel. He is the father of Richard Zabel , the criminal chief in the Southern District of New York U.S. Attorney’s Office. The younger Zabel recused himself from the case.

Marc O. Litt, who was a lead prosecutor in the Madoff probe, will join Baker & McKenzie LLP. He stepped away from the Madoff investigation in May to prevent conflicts during his job search.

Marc O. Litt, who was one of the lead prosecutors in the Bernard Madoff case, is leaving the Manhattan U.S. Attorney’s office.

Litt, an Assistant U.S. Attorney who worked in the office for eight years, will join Baker & McKenzie LLP, the Wall Street Journal reported. He had stopped working on the Madoff probe in May to avoid conflicts during his job search, the Journal reported. 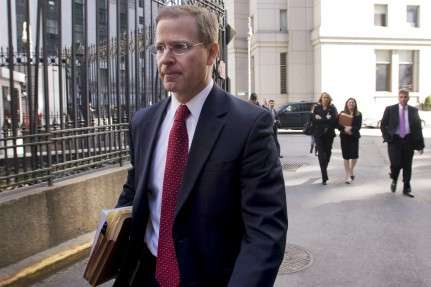 Litt and fellow Madoff prosecutor Lisa Baroni were often out-gunned in the sprawling probe of Madoff’s massive Ponzi scheme. They  labored to sift through what the Associated Press called a “massive blob of amorphous evidence,” and went up against lawyers from seemingly every high-priced law firm in New York. Their offices were shabby, and they didn’t have an army of assistants.

While Madoff is behind bars and several employees of Bernard L. Madoff Investment Securities LLC are under indictment or have pleaded guilty, prosecutors haven’t succeeded yet in bringing criminal charges against any of the allegedly most culpable big fish.

Instead, attention has been on the court-appointed bankruptcy trustee Irving Picard of Baker & Hostetler LLP, who has filed a blizzard of civil lawsuits to recover funds for the victims.

He’s made allegations against the banks (UBS, HSBC, J.P. Morgan Chase and other institutions) that he says helped funnel investors into the scheme or turned a blind eye.

He’s all but accused other wealthy individuals of being partners in the Madoff crime. (“In Sonja Kohn, Madoff found a criminal soul mate, whose greed and dishonest inventiveness equaled his own,” says a complaint against the Austrian banker whom Picard said received at least $62 million, and probably “far more,” from the Ponzi scheme.)

And Picard has been trying for more than a year to settle with the estate of Madoff pal Jeffry Picower, who died last year while swimming in his Palm Beach pool after allegedly taking $7 billion from the scheme. (Picower’s long-time personal lawyer is William Zabel, father of SDNY Criminal Chief Richard Zabel, who recused himself from the case).

Criminal cases, with their higher standards of proof, are harder to bring than civil allegations. But none of the alleged major beneficiaries of the scheme as outlined in Picard’s civil lawsuits have been charged.

Michael English will serve as deputy chief of the White Plains division. He joined the office in 2005 and served in the violent crimes unit in Manhattan.

Please send news of moves, promotions and honors to personnelchanges@mainjustice.com